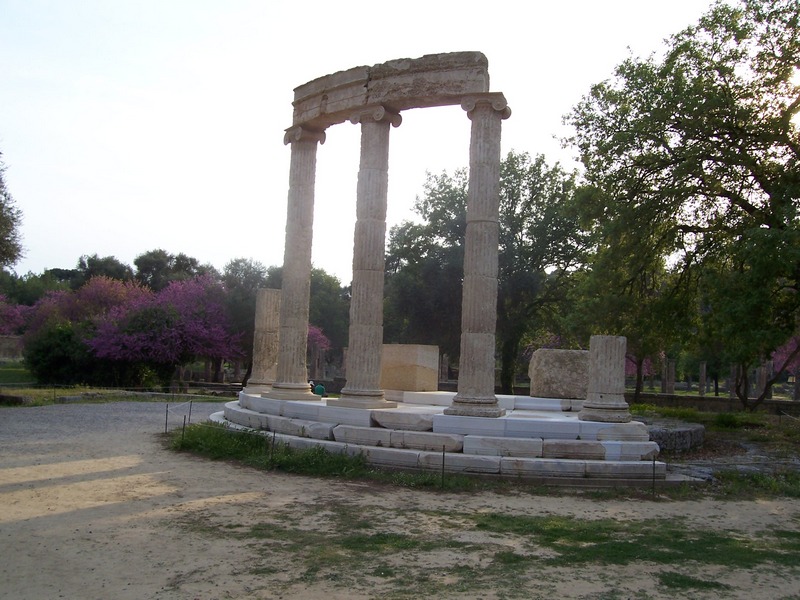 Olympia was the most glorious sanctuary of ancient Greece dedicated to Zeus. It was the venue for the Olympic Games that took place during the Olympian Era, the most important celebration of Greeks during most of the antiquity. Corresponding festivals were the Pythia that were organized in honor of Apollo in Delphi, Isthmia in honor of Poseidon in the Isthmus of Corinth and Nemea, also in honor of Zeus in his sanctuary in Nemea.
In Olympia, within the magnificent temple of the god, was the statue of Zeus, a work of Pheidias, which was known in antiquity as one of the seven wonders of the world. The starting point of the Olympic Games is placed in 776 BC  and was every four years. During the Hellenistic period several edifices, mainly secular, such as Gymnasium and Palaestra, were erected, and in the Roman years, they were transformed into existing ones. Thermal houses, luxurious residences and the aqueduct were also built. The operation of the sanctuary continued in the first Christian years on Constantine’s day. In 393 AD the last Olympics and later the emperor of Byzantium Theodosius I, with a decree, forbade definitively their execution because they were considered pagan, whereas on Theodosius II the final destruction of the sanctuary (426 AD) took place.

The beginnings of Olympia are little known. The oldest evidence of human presence in the region dates back to the 4th millennium BC  due to the large number of shells found on the northern slope of the Stadio. Additionally, on the southern foothills of the Kronion hill, findings have been identified that show that the first sacred and prehistoric cults developed there. For the period of the 3rd millennium BC, the finds of that period, found, are a large tumulus in the lower parts of the Peloponnese (2150-2000 BC) and arched buildings of the settlement (2150-2000 BC). In the 10th century BC with the 9th century BC the sacred site of Alteus is formed with the establishment of Jupiter’s worship. During this period, Olympia became a sacred place that attracted many pilgrims. This dense stream of visitors is testified by the great number of votive offerings that arrived at Olympia not only from the surrounding area but also from the Peloponnese and Sterea Ellada. In the 8th century the reputation of Olympia grew as much as it reached to the East and Mesopotamia and to the West and down Italy.  An important breakthrough in Olympia’s history was the year 776 BC  where, at the time of tradition, the Spartan Lycurgus, must have made an agreement with the king of Helida, Iphitos, for the celebration of worship in Olympia. Part of the deal was that during celebrations there would be a ceasefire across Greece. In the 5th century, the glamor of Olympia reached such a point that political, philosophical and artistic groups were gathering there because there were large audiences to disseminate their ideas. During the 4th century, importance was given to building activity to improve facilities and create accommodation spaces for visitors.
In 393 AD the Byzantine Emperor Theodosius I ordered the closure of all Greek sanctuaries without any information what specific places he meant. Nevertheless, in the years to come, space has remained particularly popular. The site was later destroyed by natural causes and in the 9th century the site was abandoned and deserted. Over the years, many measures under the earth were covered with the help of the stream of Cladeus and the erosion of the soil of the Cronius hill.